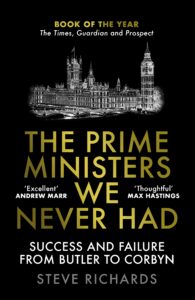 The Prime Ministers We Never Had
Success and Failure from Butler to Corbyn.

In this piercing and original study, journalist and commentator Steve Richards looks at eleven prime ministers we never had, examining what made each of these illustrious figures unique and why they failed to make the final leap to the very top. Combining astute insights into the demands of leadership with compelling historical analysis, this fascinating exploration of failure and success sheds new light on some of the most compelling characters in British public life.

In Sir Antony Seldon’s words: ‘Britain’s unusually capricious system of selecting its prime ministers means some very gifted leaders have been left on the shelf.  There is no one better qualified than Steve Richards to blow away the cobwebs, and to tell us which of them might have made better prime ministers than the rum lot we sometimes got.’